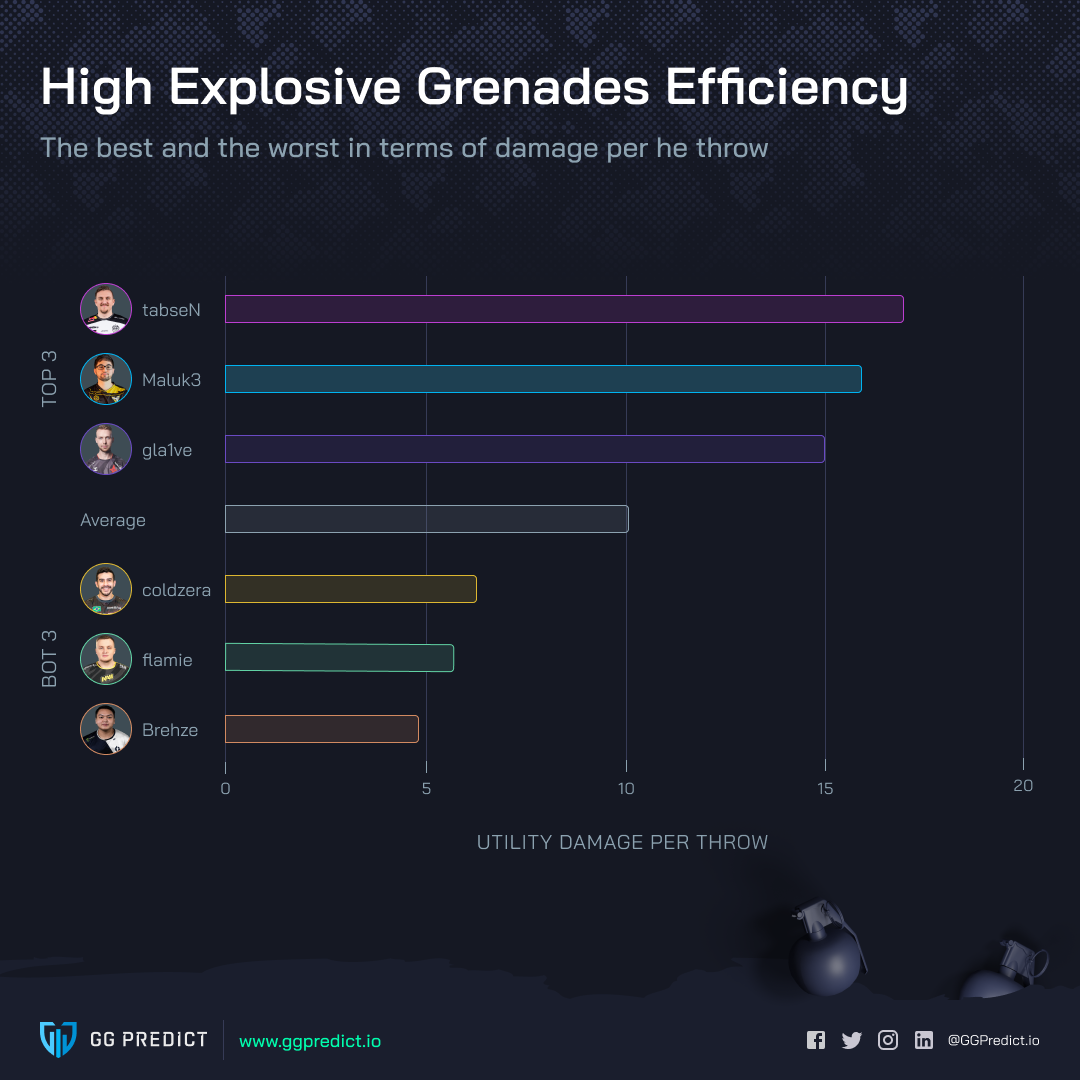 Who was the best HE player in terms of DMG per throw, what team was the best in terms of HE efficiency, who threw the most HE grenades in 2020? We have analyzed 1,827 matches* and found out the answer

2020 ended more than a month ago, so it's the best time to sum all the data and find out who was the best.

We took top30 teams from 2020 from our ranking and analyzed all their matches in the previous year. In this case, we focused on the number of grenades thrown per round.

In the high explosive grenades efficiency, we focused on damage, that each nade made per throw.

The best HE grenade efficiency player from the top 30 teams was tabseN from BIG Clan. He needed just a little bit more than 6 nades to eliminate an opponent.

On the bottom of the table, there is Brehze from EG, who would need to throw 20 nades... and it wouldn't be enough.

In the high explosive grenades efficiency, we focused on damage, that each nade made per throw.

The team, that throw the most HE per round was Mad Lions. In 2020 Danes throw about 1.5 HE per round. In their case, the more nades you threw wasn't the more dmg you deal. In DMG per throw, they were almost on the bottom of the table, only ahead of FaZe Clan, NaVi, and Chaos.

The best team in HE Efficiency was definitely Astralis. They throw only about 0.8 HE per round, and each of their nade made approximately 12 dmg.

What's not surprising, top spots at HE grenades thrown per round are occupied by players from the teams that throw the most or the best nades. Ex-Astralis player, es3tag**, threw 0.5 HE grenade per round. It means that he threw 62.5% of Astralis he grenades when he was in the team.

At the bottom of the table, we can find CeRq from EG. It also shouldn't surprise anyone, because Evil Geniuses threw only 0.4 HE grenade per round.* For each team we took only players that have played at least 20 maps.
** In es3tag case we have analyzed only his matches as an Astralis player because Cloud9 didn't manage to advance to top30 of our ranking.